They call Los Angeles “The City of Angels.”  I didn’t find it to be that, exactly.  But I’ll allow there are some nice folks there.  Course I can’t say I’ve seen London, and I ain’t never been to France.  And I ain’t never seen no queen in her danged undies, as the feller says.  But I’ll tell you what, after seeing Los Angeles, I guess I seen something every bit as stupefying as you’d see in any of them other places.  And in English, too.  So I can die with a smile on my face, without feeling like the Good Lord gypped me.

Well, L.A. was next, and what can you say.  The traffic reports are legit.  The smog complaints are too.  No point in ever visiting here, really.  But we managed a pretty solid time, all the same.  Thanks to the good people in our family.  If not for them, L.A. would hold NOTHING of value for me.  Except, of course, some of the places mentioned in The Big Lebowski.

I made it there for two days before I had to go work, but my Crew stuck it out for TWO WHOLE WEEKS!!!  A “medicinal” dispensary on every corner, hours just basically parked on the freeway, yeah, it was a blast.  We did get to see Malibu (“Stay out, deadbeat!”).  Visited the unparalleled In-n-Out Burger.  Had a blast on Santa Monica Pier, and even got in an Angels game (with Seth Smith hitting the eventual GW home run for the visiting Mariners).  So it wasn’t all bad.  But I can’t imagine anything that could get me to go back.

The In-n-Out Burger’s on Camrose.

Papa Ryan got a Porsche.  Word. 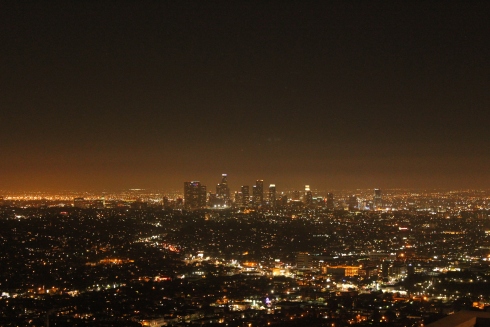 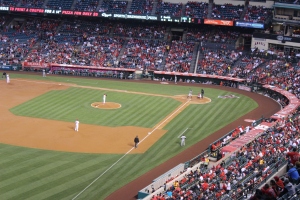 So that’s Seth Smith at bat.  You don’t have to believe me.  I was there.  King Felix was on the mound for the M’s.  Nelson Cruz went yard too.

Getty Museum.  Yeah, we do art.