January 9, 2015 lanebrent Blow Up Your TV Leave a comment

Bregitte has long pleaded with me to take her to New Orleans.  Well, I have sort of grown up going down there, and while it certainly is as unique of a place as anywhere in the States, I haven’t been excited about the Big Easy in a long time.  So, despite my protests, we made plans to spend the last night of my time off in the Crescent City.  The highlight was SUPPOSED to be a trip to the world famous Audobon Zoo, but it was closed on the day we were planning to visit!  So was the Aquarium of the Americas!!!  Big time bummer.  So we decided to explore the French Quarter for the afternoon instead.  The smell was almost unbearable, but the kids didn’t seem to mind, and we stumbled upon some tasty Cajun cookin’, and took the trolley for a ride to the Audobon Park, down St. Charles.  We had a pretty good couple of trolley rides, and the girls had a fun time at the park (playground, of course).  We took the trolley back to the hotel on the outskirts of the Quarter just before nightfall, but I had us get off on the wrong block.  Then, GoogleMaps had us going in the wrong direction as darkness began to descend on this creepy place.  But I didn’t panic (outwardly), and we made it back with no trouble of which to speak.  The following morning we walked about a mile to Cafe Du Monde and devoured a few plates full of beignets, and followed that with a pleasant walk along the Old Man before I had to go to the airport.  In all, it wasn’t too bad of a trip, and again, we saw another side of this amazing country of ours that not everyone gets to see.

*Bonus:  We saw a old homeless guy peeing in the street in the middle of the day!  ‘Murica! 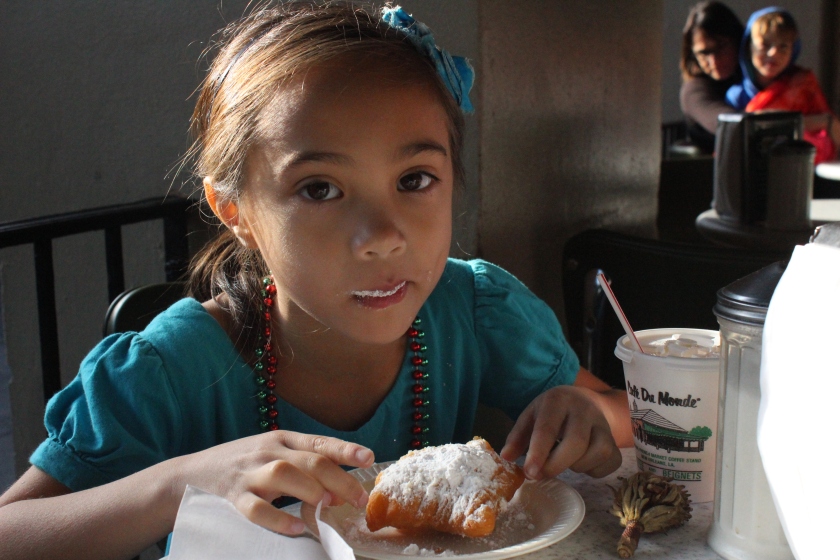