They finally shut down the generation but water conditions were far from perfect. The water is very off color caused by, in my uneducated opinion, the flooding from this spring. This has happened the last two times there has been major flooding on the lake. The dirty water just heads down stream and the last place that clears up is the dam (and the river) area. Add to that the lake is starting to turn over and not only does it get dirty but stinks right below the dam. That is why I haven’t been fishing.

Having said that the fish are still there! Decided to fish because we had “relatives” who wanted to give it a go. Would have fished the White but wading was going to be hit and miss. Took my brother from Seattle fly fishing for the very first time. Didn’t take long for him to get the hang of of it. He caught fish both days on the olive bugger. I hope he will continue ti pursue the sport  as he lives close to some great trout fishing.

My nephew, who got me started fly fishing, and his son were also there. They both did really good mostly on the midge. My brother David, whose 50th wedding anniversary celebration was the reason for us being together, was also fishing. We spent most of our time keeping the others on fish.

It was great. Hopefully the water will return to “normal” soon. 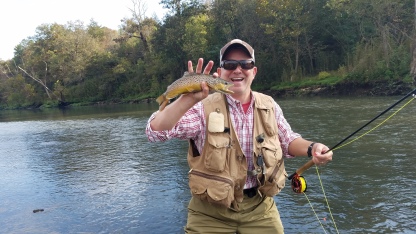