I have been a bit remiss in posting in that I have been putting most fishing reports on the FlyFishingArkansas website.

Like we have said before timing is everything. Rain not as bad as originally suggested but that may be changing.

Fished Monday and Wednesday and what can I say? This might get me in trouble over at FFAM but the fishing on the Fork is just lights out. Wednesday I saw one boat fishing in the C&R. Met a gentleman and his son from Hattiesburg, MS at the boat ramp. I pass out my “business” card a lot and often get asked if I am a guide. Guides do not get to fish enough! I almost always tell folks to give me a call if when they are in the area but they rarely do.

Pressure from bait guides is increasing and all I can say is, “Where have you been?” Also a lot more fly guides in drift boats. I know a lot of the guides and most, but not all, are good folks. The deal is not many more people wading. I have nor seen the poaching that is often cited else where but I almost always leave as soon as the water comes up which is when more power boats access the C&R.

Most of us go through phases in life and in fishing. When I swapped from mainly bass fishing to fly fishing it was all about numbers. If we weren’t chasing a hundred it was a bad day. And the bug of choice was Hank’s Wooly Bugger. Let me be truthful I have never caught a “big” trout in AR. Not when you consider the state record is over 40 lbs. Big fish are being taken on bait still and some people are catching some big’uns on streamers fly-fishing mostly out of boats. But, I want to be in the water (to a certain point J) not on it. We did go smaller as far as flies are concerned midges, soft hackles, sow bugs etc. Still some impressive numbers and a twenty inch fish on an 18 – 20 midge is pretty cool.

Sight fishing has become the most fun for me. Really started for me personally when Brent and I started feeding beads to big trout in AK. I have a hard time spotting fish but and getting better at it. Brent can see them from a mile away. And I always remembered John Wilson taking Joe Humphries wading on the Little Red and Norfork on some TV show (I have it video taped.) They caught some monsters! I make a prediction that those days are coming back on the Fork.

Had a great time and will be back soon Lord willing.

“Jesus saith unto them, Bring of the fish which ye have now caught. 11 Simon Peter went up, and drew the net to land full of great fishes, an hundred and fifty and three: and for all there were so many, yet was not the net broken. 12 Jesus saith unto them, Come and dine. And none of the disciples durst ask him, Who art thou? knowing that it was the Lord. 13 Jesus then cometh, and taketh bread, and giveth them, and fish likewise. 14 This is now the third time that Jesus shewed himself to his disciples, after that he was risen from the dead.” John 21:10-14 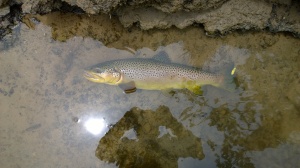 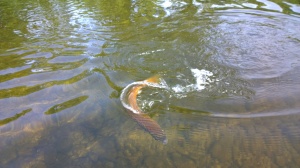