The Mission is more than Fishin’.

Spent the week on the Kenai with two new friends Bill (left) and Peter (right). They are from Minnesota and are spending the summer in AK. I pulled into Cooper Landing on Monday the day before the opener on the Kenai Peninsula. Bill and Peter were camped at Cooper Creek Campground (North) and the possibly the only campsite left in Cooper Landing was right next to them. Coincidence? We agreed to ride together to the Russian River and fish. They were after Red Salmon and I was after bows. I was wondering how crowded it would be and what the river conditions would be like. It wasn’t too crowded but the river was a little high. The Reds were in. Peter was into them pretty quick. Bill not so quick and me not at all! The Bows were not cooperating. Peter decided to set Wednesday out and Bill and I got to the river about 10 a.m. Bill had his limit pretty pretty quick. Since the Bows were still not cooperating I tried my hand at Reds and after a bit of a learning curve on the Kenai swing I had my limit also. I never could connect with the Bows and the Reds got scarce. Both Bill and Peter did get a few more.

It was a great time! Spent a lot of “quality” time discussing matters of eternal significance! Hope to meet up again before we all leave AK. 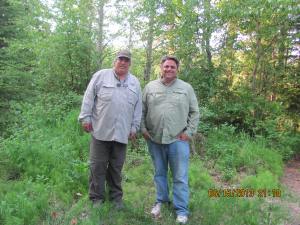 On Saturday day met up with Nate Smith his daughter and friends from Anchorage. All seven of us rafted down the Kenai from the lake to Jim’s Landing. We found no Reds (except for where fishing was prohibited) and only one bow! But he (she?) was a doozy! See below. What a great way to spend a day. Thanks Nate!