Gail and I came up for a few days before we head to AK again! It ad been a couple of weeks since we had been and I needed to mow at the trailer – I thought. With the drought is hardly any grass. It was “warm” Monday but today Tuesday it was beautiful. Fished the White both days, Steamboat Shoals Monday and Rim Shoals Tuesday. Just can’t seem to hit Steamboat right. Water has to be off on both rivers to be able to fish it properly. (It takes the water from Bull Shoals about 18 hours to get this far south.) Its was almost right when I got there but was rising. I knocked out on the sowbug until I had to quit.

Planned on hitting the Fork Tuesday but they were generating! That eliminates Steamboat if they have been running over about four or five hours. So I headed to Rim. This used to be one of my favorite spots but not so much anymore. I just like to stay close to “home.” It was slow but super nice weather and surroundings.

Brent has been on me about my pics so here are a couple from his play book. Steamboat first Rim second. Gail likes the sleeves of my shirt! 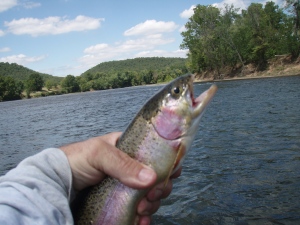