The year fishing has started off with a bang! First trip to AR in February started off with a wreck! (Hit two cars on an icy road and “lost” a rod and my “precious” reel.) Fished a couple of days but my heart wasn’t in it. Did get to go out with my friend Mike from St. Louis always a good time. Snowed in a couple of days and had to pull the car to the end of the driveway to be able to get out and get home. 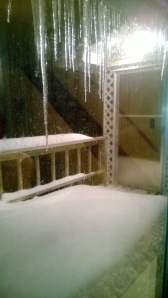 February, 17-22. Now for the rest of the story. As we say around these parts, “All’s swell that ends swell.” Nobody was hurt in the wreck. After police report everyone drove off with no “major” damage. And my new “friend” and brother in Christ, Kevin, found and returned my rod and reel. He found the serial number on the rod called Sage and they paid to have the outfit picked up and sent back to me! So Gail and I looked for the first decent weather and here we are. God is good all the time! 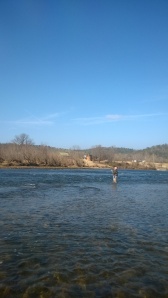 Tuesday fished the Fork on dead low water. They are having trouble with the siphon and they were not running any flood gates. Siphon is working as of today. Headed to my new favorite spot and it was epic. Water is still a bit stained and it was partly cloudy so while not perfect for sight fishing it was close enough. Nothing but bows for the first couple of hours but some very nice fish (see below). And just like that the browns moved in four over fifteen inches with one near to if not over twenty. Sling the Don’s Bug out there, drift if by, watch him move on it – bam – fish on. It hardly gets any better than that! Thought I was pretty “hot stuff” until my friend Joe showed me the 27 his son had caught – out of the place I just left.

Well hope to get out tomorrow before we head home. 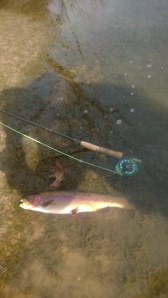