SWPA said the water would be off at 10 a.m. and they were right on the money. Funny thing was I was the only one in the parking lot when they went down.

Called Jack, we had planned on fishing the Ackerman Access, but opted for the dam. The fish were everywhere but they were picky, that is…

Until Don showed up. Don is a fish catching machine. His s Bug is a sho nuff killer. He was gracious enough to give me several and I too began to look like an ole’ pro.

Here’s a nice bow I got earlier. 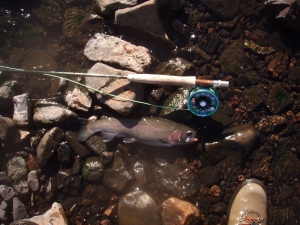